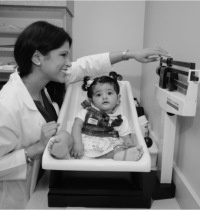 Each year, top disease experts and doctors who care for children work together to decide what to recommend that will best protect U.S. children from diseases. The schedule is evaluated each year based on the most recent scientific data available. Changes are announced in January if needed. The schedule is approved by the American Academy of Pediatrics, the Centers for Disease Control and Prevention, and the American Academy of Family Physicians.

How are the timing and spacing of the shots determined?

Each vaccine dose is scheduled using 2 factors. First, it is scheduled for the age when the body’s immune system will work the best. Second, it is balanced with the need to provide protection to infants and children at the earliest possible age.

Why are there so many doses?

Researchers are always studying how well vaccines work. For many vaccines, three or four doses are needed to fully protect your child. The doses need to be spaced out a certain amount to work the best.

Why is the schedule “one size fits all?” Aren’t there some children who shouldn’t receive some vaccines?

Your child’s health and safety are very important to your child’s doctor. The schedule is considered the ideal schedule for healthy children but there may be exceptions. For example, your child might not receive certain vaccines if he or she has allergies to an ingredient in the vaccine, or if he or she has a weakened immune system due to illness, a chronic condition, or another medical treatment. Sometimes a shot needs to be delayed for a short time, and sometimes not given at all. Your pediatrician stays updated about new exceptions to the immunization schedule. This is one reason your child’s complete medical history is taken at the pediatrician’s office, and why it is important for your child’s health care providers to be familiar with your child’s medical history.

Why can’t the shots be spread out over a longer period of time? There are 25 shots recommended in the first 15 months of life; why not spread these out over 2 or 3 years?

First, you would not want your child to go unprotected that long. Babies are hospitalized and die more often from some diseases, so it is important to vaccinate them as soon as it is safe. Second, the recommended schedule is designed to work best with a child’s immune system at certain ages and at specific times. There is no research to show that a child would be equally protected against diseases with a very different schedule. Also, there is no scientific reason why spreading out the shots would be safer. But we do know that any length of time without immunizations is a time without protection.

I’ve seen another schedule in a magazine that allows the shots to be spread out. It was developed by a pediatrician. Why can’t I follow that schedule? My child would still get his immunizations in time for school.

There is no scientific basis for such a schedule. No one knows how well it would work to protect your child from diseases. And if many parents in any community decided to follow such a schedule, diseases will be able to spread much more quickly. Also, people who are too sick or too young to receive vaccines are placed at risk when they are around unvaccinated children. For example, following one alternative schedule would leave children without full polio protection until age 4. Yet it would take only one case of polio to be brought into the U.S. for the disease to take hold again in this country. This schedule also delays the measles vaccine until age 3. We have already seen outbreaks of measles in some parts of the country because children were not immunized. This is a highly infectious disease that can cause serious harm–even death. The reason we recommend vaccines when we do is because young children are more vulnerable to these diseases. Pediatricians want parents to have reliable, complete, and science-based information so that they can make the best decision for their child about vaccination.

Isn’t it possible that my child has a natural immunity to one or more diseases? If he does, can’t he skip the shot?

Tests that check for immunity to certain diseases do not work well in young children.

Isn’t it overwhelming to a child’s immune system to give so many shots in one visit?

Infants and children are exposed to many germs every day just by playing, eating, and breathing. Their immune systems fight those germs, also called antigens, to keep the body healthy. The amount of antigens that children fight every day (2,000-6,000) is much more than the antigens in any combination of vaccines on the current schedule (150 for the whole schedule). So children’s immune systems are not overwhelmed by vaccines.

There are no shots given at 9 months, other than maybe flu vaccine or catch-up vaccines. Why not give some at that visit instead of at 6 months or 12 months?

Waiting until 9 months would leave the child unprotected from some diseases, but 9 months is too early for some of the 12-18 month vaccines. For example, it is too early for the live measles, mumps, rubella and varicella vaccines, since some infants might have a bit of protection left from their mother during the pregnancy, and that protection could make the vaccine less effective.

I’ve heard that vaccines are not needed because these diseases were disappearing even before the vaccines were developed. Is this true?

This is not true. Many diseases do not occur or spread as much as they used to, thanks to better nutrition, less crowded living conditions, antibiotics, and, most importantly, vaccines. However, this does not mean that the bacteria and viruses that are responsible for these diseases have disappeared. Immunizations are still needed to protect children from these diseases.

For example, Haemophilus influenzae type b (Hib) diseases were a major problem a few years ago until the vaccine was developed for infants. Over several years, we went from 20,000 cases of Hib diseases to less than a few hundred. The vaccine is the only explanation for this decrease. Unvaccinated children are still at risk for Hib meningitis and other serious illnesses. An outbreak of Hib in 2008 in Minnesota made 5 children sick and 1 died from the disease. In 3 cases, the parent or guardian opted to forego or defer the vaccine series; in the other cases, the children had not received the booster dose.

Haven’t these diseases been virtually eliminated from the United States? Why does my child need to get vaccinated?

Immunizations have reduced most of these diseases to very low levels in the United States. However, some of these diseases are still common in other parts of the world. Travelers can bring these diseases (“import”) into this country. Without immunizations, these infections could quickly spread here. Immunizations also help people who cannot be vaccinated or who do not respond to vaccines if those around them are vaccinated. For example, of the 29 measles cases reported during January–February 2011, a total of 28 were import-associated, meaning a person from another country brought measles here, a US resident got measles while visiting another country, or people in the US were exposed to someone who got measles while in another country.

(Taken from the CDC)

Still, have questions about child immunization? Please see the American Academy of Pediatrics for more information about the childhood vaccine schedule, or contact our office, Peekaboo Pediatrics in Houston, TX at (713)-861-4800 !